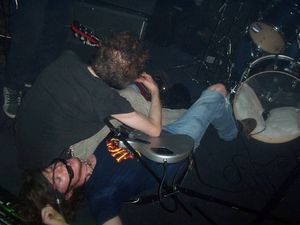 I'm one of these lucky people surrounded by a group of friends who are all very creative. My friends are artists, tattooists, photographers, cartoonists, film makers, musicians and much more. It really is inspiring to see each individuals contribution. Whilst we are all supportive of each other, it's fair to say we also enjoy each others misfortune too - take my graceful fall for example. Where an artist may draw a bad picture or a photographer might blur a shot, a musicians mistake can be a whole lot more devastating, especially when performing live. Sometimes one mistake can spiral into a sequence of errors, eventually unraveling into a complete clusterfuck. Songs restarted, instruments breaking, venues closing early, on-stage disputes, fights… it can all go very, very wrong, very, very quickly.

One of the songs on our next album is entitled 'Train Wreck' and is all about these painful occasions. When a band has a particularly bad gig, we have always referred to it as a 'train wreck' and in the Bombs I’ve been conductor aboard a fair few wrecks myself, much less these days thankfully. They live long in the memory and tend to haunt the passengers like a rail-yard ghost. Some don't survive - I've known a handful of bands call it a day after such a disastrous live shows. Still, it's hard to deny the entertainment factor of such a spectacle.

Train Wreck: “a chaotic or disastrous situation that holds a ghoulish fascination for observers.”

Of the hundreds of gigs I’ve played with various bands I can vividly recall the train wrecks. They are usually not through my causing I might add, but that changes nothing as your performance smashes into pieces before the watching eyes and listening ears of a live crowd. Three years ago, on our way back to Blackpool from a dismal gig in Chorley, Damien and myself began to reminisce over the train wrecks we’d been involved in. It was a depressing conversation to say the least. One thing it did highlight was that some of these wrecks were far worse than others. So, for your personal schadenfreude, here are The Senton Bombs three biggest train wrecks in the band’s history.

Jenx, our most regular haunt in the early years of the Bombs. We’d been booked in as the headline band on Halloween, something we’d done previously in 2005 with much success. By 2007 the band was changing drastically, we’d just parted ways with Ronnie Bomb and Josh Bellew had taken over on the kit. The first two gigs we had booked with the new line-up had been closed down due to police involvement (the first due to crowd trouble and the second due to under-age attendees).

Halloween should have been the kick-start the new-look band needed. It got past midnight, with everyone well pissed and excited we took to the stage. I can’t remember what we were all dressed as but CSOD (Constant Source Of Disappointment) were down front and I distinctly remember Ligzig Rightguard dressed as an old lady. We kicked into the set with ‘Buy Me A Gun’, a ferocious punk rock song which got the crowd instantly moving. I hadn’t noticed during the song as I was busy singing but it turns out that Justin (CSOD's original drummer) and Ligzig were spitting beer at Jimmy Kage (Bombs original lead guitarist and Damien's younger brother). This is something we did to each other at most gigs, no idea why, just became a thing for a while.

However, on this night Jimmy clearly didn’t want the beer spitting in his face. He apparently gestured several times to the offenders only to be showered in more beer. Jimmy gave Justin a tap in the face with the end of his guitar as the song came to a close. The next thing Justin was up on stage, Jimmy grabbed him and began hurling punches. They fell into the drum kit, bouncers rushed the stage, Josh ran out the fire escape. I was in the thick of it, trying to pull the bouncers off Jimmy so we might continue with the gig. Next thing ‘Old woman Ligzig’ is on-stage smashing a plastic glass into the side of Jimmy’s face, an image I'll never forget. More bouncers arrived with the owners and staff pitching in too.

We only managed that one song and the gig was over - a train wreck like no other. In time we made our peace with the club owners but I don’t think any of us ever forgot it. People occasionally mention it to me when I’m out in Blackpool – “I remember seeing you guys in Jenx a few years ago…” although we played there numerous times, I immediately know which night they are probably referring too. Without doubt our number one wreck of all-time.

This one would be the biggest wreck of all time had the previous not been so infamously bad. Every Christmas at the Blue Room several bands would perform three songs each for the 'Messy Xmas' gig, one of which has to be a Christmas song. At the time we were a 3-piece, just Damo, Mason and myself. We were headlining and with it being local, decided to hit the beers – it was only three songs after all. The Blue Room was packed as we took to the stage, opening with an awful rendition of White Christmas it soon became apparent that Damien was in a bad state. Playing any old chord as he swayed around the stage incoherently.

As we went into our second song Damien’s guitar strap came loose. Instead of fixing it he bizarrely threw his Les Paul to the ground, snapping the neck clean. For reasons unknown to all he then made an attempt to push Mason’s drum kit over before giving up and jumping into it. I turned to watch as the fury in Scott’s eyes flared. On the same stage I would stop the two having a mid-set fight only a few months later, but that’s another tale.

After ruining the gig, losing guitars and some drums, Mason and myself were reduced to a drum and bass combo as Damien disappeared into the crowd. I should have ended the gig there and then, but we regrettably decided to bash out our last track ‘No Return’ to try and salvage something… big mistake.

Vicky Spencer (currently of Alpha State Of Mind) jumped up on stage and started singing nonsense down the mic. I looked at Mason in bewilderment, what had we done to deserve this? The song scrambled to an abrupt halt and a big ironic cheer let out from the clearly amused audience. I came off stage devastated as Stormy Weathers (of the Drop-Out Wives) told me it was the best Bombs gig he’d ever seen, instantly confirming it had been one of our worst. Safe to say some intense discussions went on between the three of us following this one. Total debacle.

Just thinking about this one causes me to shudder. A wreck for different reasons than the above, if only an on-stage fight would hav 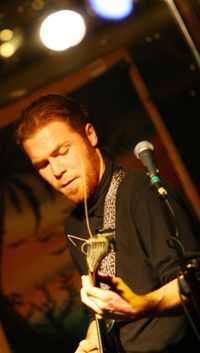 e ended this one after the first song it may not have been so bad. Another from the Jimmy/Josh era and another revolving around the younger Kage (Note to all - Do not start a band with the Kage Brothers!). Basically he’d got wasted as he did before many gigs as time went on. The place was busy as it was one of the Rock Hard Records owners birthday’s, with lots of local bands strutting their stuff it was a good occasion to showcase our songs and hang out with good people. Well, it should have been.

Before we got on-stage a wasted Jimmy was stood mid-dance floor doing a slow-motion shimmy to Metallica. Josh snuck up behind him and fully kegged him, boxers and all. With his dick dangling he produced his infamous Cheshire cat grin and carried on with his shimmy. I knew we were doomed right then.

As we got on stage the brothers began fighting over who was using the big Marshall cab. The pair of them shouting my name in tandem as they played tug-o-war like the fucking Chuckle Brothers with the cab is the part I most regularly regale. What a sight. I encouraged Damien to be the bigger man, give in and let his wasted brother use the cab. He acquiesced... after five more minutes of comedy bronze.

The set began… three of us struck a chord… then Jimmy several seconds behind us. I recall us playing a horrendous version of one of our long metal-style songs ‘Nightbreed’, as people I knew in the crowd grinned and shrugged their shoulders at me – rather than a “what’s going on?” look, it was more a “nothing you can do mate”. We made the crowd suffer through a couple more songs before I called it early. Embarrassing and disappointing, can you say 'Train Wreck'?

Every band has them from time to time, it’s how you recover from a train wreck which matters most. You can either roll with the punches and hope it's not a regularity, address the causes to prevent it ; or quit the band as to avoid such public shame in the future. Regardless of how a band deals with it, it goes without saying that everyone loves watching a train wreck… because they are truly fascinating to observe.