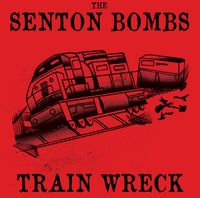 The rise of British rockers, The Senton Bombs, has been the complete opposite to the title of their new single Train Wreck, yet like a runaway locomotive it has only picked up steam and intensity. Formed in 2004, the band swiftly made an impact but since the release of their album Chapter Zero in 2013, and even more so over recent times, the Blackpool hailing hard rockers have simply become one of the UK’s most thrilling incitements.

Their latest track comes from the recently released critically acclaimed album Mass Vendetta, the band’s most diverse and boldly adventurous offering yet. It is the latest landmark in their attention grabbing ascent, with third single Train Wreck, epitomising its raw energy and devilish fusion of rock ‘n’ roll with a broad array of styles from classic rock to punk, metal and country; all conjured with inventive imagination.

Train Wreck hits the groove from its first breath, pulsating rhythms providing the hypnotic rails for spicy grooves and feisty riffs to roll along. Within seconds, body and spirit are as compelled to get involved as ears, the dusty tones of vocalist/bassist Joey Class leading the way as spirals of bluesy flaming infects grooves and flirtatious melodies cast by guitarists Damien Kage and Johnny Gibbons.

Throughout, drummer Scott Mason is the instigator to the rockabilly courting swing of the song, the incessancy of his rhythm and prowess pushing the song towards the rock ‘n’ roll of bands like The Pirates as a Turbonegro like blaze filling the rest of the track’s rousing persuasion.

Mass Vendetta is an album which embraces numerous songs which can push it and the band’s stature to new heights; Train Wreck is just one of the very best.

From: The Reverb Room

Hailing from Blackpool, The Senton Bombs (I presume named after the Wrestling move of the same name) combine a plethora of influences to create loud, brash and bombastic Hard-Rock.

"Train Wreck" is the latest single to be released from their "Mass Vendetta" album and it's a relentless assault of the senses that does it's very best to encapsulate the chaotic catastrophe that is "Train Wreck" gig where everything goes wrong.

"Train Wreck" hurtles down the track right from the intro and I can't help but make a comparison to Use Your Illusion I opener: Right Next Door To Hell. The driving rhythms in the bass and the drums perfectly simulating the chugging of the train engine with the lead guitar and even the vocals as they snarl out the title of the track being a vivid representation of the frenzied whistle of an out of control locomotive.

My comparison to Guns N' Roses doesn't stop with just the tone of the opener but even the interplay between guitars is reminiscent of the most angsty and biting of GnR's material with The Senton Bombs adding their own flair to give the sound the authenticity it deserves rather than restricting it to a copycat band leaning too heavily on it's influences.

The track literally does not let up. From the offset it's a relentless force and it makes for quite the listening experience. The instrumental work is tight and nuanced with the production living up to it, giving it all the raw edge that it deserves. Vocally, Joey Class exudes that raw and arrogant charm that many of the 80's metal bands from the US popularised, yet somehow even blends in an old-school Rock N' Roll quality that leans more towards Jerry Lee Lewis and even Mr Presley himself. It's really unlike anything else I've heard recently and the band deserve credit for originality in a business swamped by bands not brave enough to fully commit to their own sound.

Train Wreck is a loud, brash and relentless track from a band who have a unique twist on a now classic sound that stands out from the vast majority of bands producing material in this genre.