Stormy Weathers - In The Class Room

Welcome to the Class Room!

It’s been almost 10 years since I used to interview stalwarts of the underground rock scene and I once again have the itch to learn more about my contemporaries. With the SB wesbite raking in over 20k hits since it's creation last year, this seems a fitting place to engage in discussions with some of the most interesting folk around.

There seems no better way to start than with the man I interrogated in my first ever interview. We’ve been friends for around 20 years and former band mates too. He’s a singer, song-writer, guitarist and, in recent times, an indie film-maker. One of the most outspoken voices of the Blackpool music scene and part-time expert internet troll, solo artist and member of the infamous Drop-Out Wives, ladies and gents - Stormy Weathers. The Class Room is all about learning, so let's start asking questions... 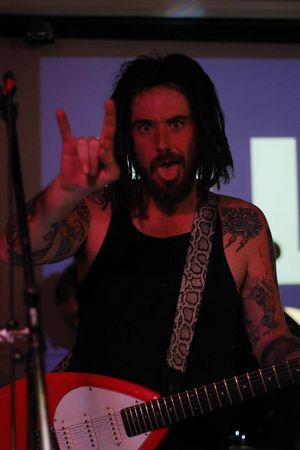 SW: 2016 has been pretty good on a personal level. Kind of chilled and quiet which is a nice change of pace from the wars that were being waged in my head a few years ago.

Though on a more global scale 2016 has been one of the most fucked up years I can remember. Seems like the world is losing it’s shit and people are snapping left right and centre. It’s an exciting time to be alive but not exactly a relaxing one. Every day there seems to be another mass killing or some political bullshit. We’re at a crossroads culturally both in this country and around the world... So apart from a bit of existential despair I’m doing pretty good.

JC: Good to hear, truly. After eight years of rocking together, how are the Drop-Out Wives doing? It’s been a couple of years since you released your 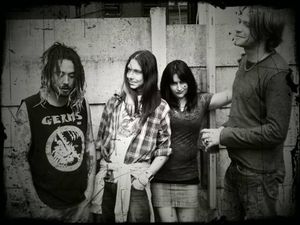 debut album ‘Voting For Gloss’, when are we going to get a follow-up?

SW: Yeah we sort of fizzled out a bit after we finished Voting for Gloss so the band took a bit of a back step for a while. We sort of blew our load and fell asleep. But eventually we got back in the saddle and wrote a new album which we’ve yet to record. I think we are gonna do a single next and a video then knuckle down to the album. But in true Drop-Outs style I’m sure there will be a lot procrastinating in between. The new songs are sounding solid though and as eclectic as always I think we’re gonna go rawer with the production this time round.

JC: A year or so back you released your first solo album ‘Haunted Hearts’ on ‘Must Die’ records. A psychedelic Country & Western inspired record featuring several musical friends (including yours truly), what has the reaction been like? Do you have plans for any more solo projects?

SW: People are far too nice to tell me that they hate my album, well at least those that have listened to it so far. Kind of weird with a solo album when you don’t do shows you don’t really have much chance for people to hear it and I’m terrible at promotion so it just sits as some sort of artefact. If people want a copy I give 'em one but I never try and sell them. Some fucking business man I am.

I released an EP last year with Simon from Hobs under the name Lucie Peppermint which was an electro album. It was a genre i’d never dabbled in and I was trying to teach myself the basics of production but it has some limited charms.

Currently working on an epic ambient concept album called “Mirtazapine Dreams”. It’s by far and wide the most psychedelic music I’ve ever made but also the most relaxing. I’ve abandoned conventional song structure in favour of a more textural approach. After a few years of mainly writing country songs on an acoustic I decided to approach music in a different direction.

JC: Busy as ever, you are prolific. Next year it will be ten years since we called time on The Side-show Sirens, one of Blackpool’s most infamous at the time and, dare I say, most popular bands over our two-year run. What are your memories of the Sirens like?

SW: Jesus has it been ten years? That’s fucking insane man. It’s weird all the memories are sort of jumbled into one big ball. Like that saying goes I remember moments not days. But yeah those were the days of our lives. Back when the local scene was taking off it felt like anything could happen. I literally can’t remember a show we did that I didn’t enjoy. when it was good it was fun when it was bad it was funny. I miss being so full of piss and vinegar that you keep doing drunk shows and not giving the slightest fuck. We had some fucking swagger that’s for sure.

JC: Indeed we did, maybe too much at times, we made our mark, at least some scars. On the subject of drunk shows and not giving the slightest fuck, tell us about your biggest 'Train Wreck'. A gig where it all went wrong? 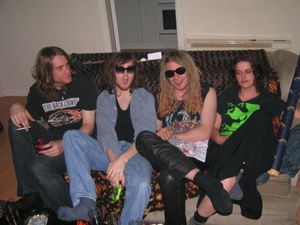 SW: The biggest train wreck gig I ever played must have been that Blackburn gig with the Sirens. It was the day we'd recorded one of our EPs and then had a show at night with a free bar and boy did we use it. I think I'd been drinking MD 20/20 on the way down and by the time i got on stage i could barely feel my fingers. The stage felt like it was under constant strobes and every time a strobe went off I looked at my hand and they were totally playing the wrong chords. I can't even look at the video from that night without a huge cringe.

The second biggest train wreck was that Halloween when CSOD and The Bombs had a fight and cleared a club. Intravenous in Furs were opening the show and I thought it was a great idea to dress like a black and white minstrel and get psychedelic... it wasn't. The fear hit me half way through the set yet I somehow managed to get through it with my mind in one piece. Then i was watching the Bombs when a fight broke out and the whole place went mental and the entire club was emptied. Was funny looking back at it but at the time it was a bit intense.

JC: Strangely enough, that's my number 1 biggest train wreck for the Bombs. The Sirens, Heaven & Hell, Blackburn gig still gives me nightmares, the guy refused to pay us it was so bad. I remember you walking around with a megaphone shouting about Maddy McCann. On a darker not, obviously our wider group of friends have always been a creative bunch, especially yourself, venturing into film-making with your 2015 short ‘Rot City’, shot on super-8, depicting Blackpool in a very dark shade. What was your inspiration for the film? Do you plan on making any more?

SW: My inspiration for the film was three local murders that took place in Blackpool over the last 20 years and i wanted to recreate it them in an artistic way. Well i mean that was the loose narrative but I like to see it as a piece of low brow art. Which means to say i approached it from an artistic perspective. It was used as a channel for my depression at the time. It’s a pretty bleak film and the score is absolutely punishing. I watch it now and go “what the fuck was i thinking?”

A follow up called Donkey Lasher is planned in the future when I save up enough money for more Super 8 film. 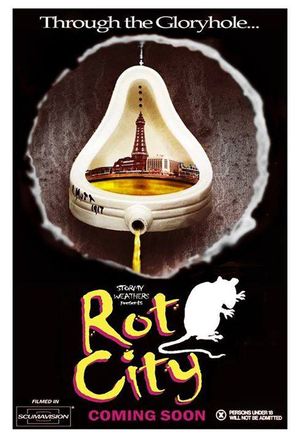 JC: On the subject of our adopted hometown, you’ve been playing live music since the tail-end of 2004, 12-years on how would you assess the local music scene and the live music scene as a whole?

SW: It’s a cultural graveyard. No one really gives a fuck about anything you do. Except for a small number of die hard fans or people that just happen to catch your band on a random night out. But on the other hand it gives me a lot more respect for the bands that stay the course the ones that toil away and that you always end up sharing bills with. There is a purity to playing in  a band for a decade in a town that doesn’t give a fuck about you. I don’t know if this is just a Blackpool thing. I’m sure a lot of towns are like that but there is also a lot of party places. The punk scene has it’s moments though, overall 99% of the general population don’t know you’re alive or perticularly care.

JC: Bleak, but honest, like the town itself in some respects. At least we're not easily deterred. What and who are your personal inspirations as a musician?

SW: I’ve got to a stage in life where i have been influenced to varying degrees by so much great music that my brain is literally a tapestry. I took something away from so many varied sources. From old country, noise rock, punk, doo wop, psychedelia garage, grunge, outsider music. It’s all been a huge influence on my song writing and music.

JC: Who is the best act you have seen live?

SW: I'm not a huge lover of live music and haven't been to that many big band gigs. It literally has to be a great band to get me out of the house. Still the best live band i've ever seen was Twisted Sister by a large margin. I much prefer watching small bands and local gigs these days. The nostalgia circuit is a dead scene. A lot of bands have become "cover band versions of themselves". I'm much more interested in up and coming bands that still have some fire in their bellies rather than old bands that are coasting on their names.

JC: You are very vocal on social media, specifically facebook. What do you enjoy about using social media and what impact do you think it has had on modern society?

SW: It’s made the world a hell of a lot smaller and I have “met” some cool people on there and been able to converse with some film makers, musicians and other fringe figures that I admired. And the fact that social media is a way to get your voice out to hundreds of people is also a great thing. I mean i use my to talk shite and take some stabs at humour rather than anything meaningful but still.

As for the impact i think that that’s the reason the pubs are so empty these days. They used to be places to socialise with the wider community but these days you can tell what a person is doing every minute of the day and all your socialising is done on a screen.

JC: I struggle to get into it but I do enjoy some of your contributions. Recommend a book, a film and a band. 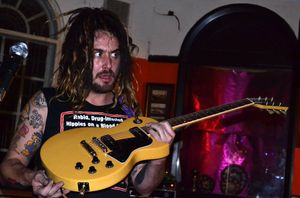 SW: Book - Dirty White Boys by Stephen Hunter (one of the best hard boiled crime thrillers I’ve read in a while)
Film - Alucarda
Band - Cosmic Psychos have been getting a lot of airplay with me recently.

JC: When I asked if you had anything you wanted to plug back in 2007 you said "Lindsey Dawn McKenzies ass". Anything you want to plug now? Leave us with something profound, a message?

JC: Big thanks to Stormy Weathers for entering the Class Room, entertaining as always. You can find The Drop-Out Wives on Facebook (www.facebook.com/dropoutwives) and check them out on Spotify. For more info on Rot City go to (www.facebook.com/rotcity).

Plenty more people on my register. The next guest in the Class Room will be Barry Mills, lead singer of the awesome 'Massive Wagons'. Stay tuned.
(04.07.16)